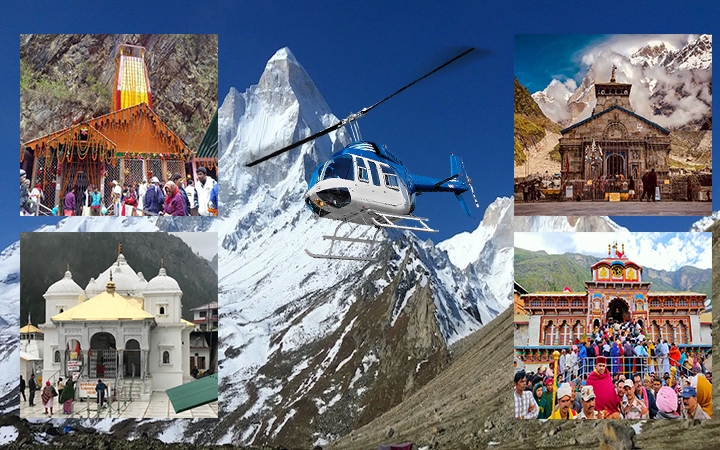 OVERVIEW-:
As one of the spiritual tour, Chardham Yatra carries a lot of devotion. This holy expedition of sacred places in India includes the visit of four shrines, namely Yamunotri, Gangotri, Kedarnath and Badrinath Dham. Visiting these four sacred places together is called Chota Char DhamYatra, which is located at the Himalayan foot hills of Uttarakhand. The Chardham tour begins from Haridwar, which is the perfect gateway to reach Uttarkashi for Yamunotri, Gangotri and Kedarnath shrine, followed by a visit to Badrinath temple. Let us explore the Chardham Yatra tour:

Gangotri Temple:
It is the place known for the holy river Ganga’s origination. According to the myth, King Bhagirath brought Ganga down to the earth. Every year thousands of visitors come to this place to get rid of their sins and recovery from bad health. It is said that Gangotri temple was made in the 18th century and the temple is made of white Granite.

Yamunotri Temple:
Being located at the elevation of 3164 meters, it is not less than bliss for the pilgrimage. Yamunotri Dham temple is situated at the river Yamuna, where devotees find both the temptation of cold and hot environment. The purified atmosphere of Himalayan gets chilled with cold tides of river Yamuna. The most amazing fact is, sides of Yamuna remains warmer, due to the thermal springs, which are also known as Goddess Shakti Kundas.

Shri Kedarnath Temple:
At an elevation of 3584 meters, you would find Kedarnath Temple above the sea level that flank around the river Mandakini. This place has one of the 12 forms of Lord Shiva as “jyotirlingas”, which was dropped on the hills of Mandar (The main location of temple). The temple has been constructed by AdiShankaracharya and named it as of the name of King Kedar. Idols from Shri KedarnathDham are brought to Ukhimath, during winters and worshipped for six months.

Shri Badrinath Temple:
Being elevated at the height of 3415 meters, this temple is situated in Garhwal Hills on the bank of the Alaknanda River. This sacred place is known for the devotion to Lord Vishnu. According to the myths, Lord Vishnu used to meditate under the Badri tree at this place. Hence, the name of this temple was given so. The idol of God Badrinath is made of Shaligram statue, in a meditative pose. As per the saying, Adi Shankaracharya made this temple in the 9th century. People can get the ultimate peace of mind by experiencing the spiritual temptation of Chardham Yatra.

Devotees across the world come for Chardham Yatra to get into the eternal bliss. You can check numerous Chardham Yatra package available on the web at affordable prices by the professionals.