The Uttrakhand Char Dham is a set of four pilgrimage sites in India. It is believed that visiting these sites helps achieve moksha. The Char Dhams are, Yamunotri , Gangotri , Kedarnath , Badrinath. It is believed that every Hindu should visit the Char Dhams during one's lifetime.
Kedarnath - One of the most revered temple destinations of India, Kedarnath town is nestled in the mighty Garhwal Himalayas. The town, built around the revered Kedarnath temple, is located at an altitude of 3,580 m, near Chorabari glacier, which is the source of the Mandakini river. Dedicated to Lord Shiva, the ancient temple has exquisite architecture and is built of extremely large but evenly shaped grey stone slabs. A conical rock formation inside the temple is worshipped as Lord Shiva in his “Sadashiva” form.  The Kedarnath temple, dedicated to Lord Shiva, is a part of Char Dham pilgrimage circuit, and is one of the 12 Jyotirlingas of Lord Shiva in India. Behind the Kedarnath temple, stand the Kedarnath peak, Kedar Dome and other Himalayan peaks.

Rishikesh - Set against the backdrop of the Himalayas and with the pristine Ganga flowing through it, the ancient town of Rishikesh is one of the major tourist and pilgrimage hubs in northern India, where people from across the world arrive in search of peace. Rishikesh is commonly referred to as the ‘yoga capital of the world’ and rightly so. The destination is abuzz with visitors, who come here to learn yoga and meditation. Rishikesh has numerous ashrams, some of which are internationally recognised as centres of philosophical studies, yoga and other ancient Indian traditions of wellness. The Uttarakhand Tourism Development Board organises the annual International Yog Festival (IYF) here, which attracts thousands of yoga enthusiasts. There are several legends associated with Rishikesh. It is said Rishikesh finds a mention in the ancient text Skanda Purana, and in the epic Ramayana. It is said Lord Rama, along with his brothers, came to Rishikesh to do penance after killing Ravana.
Chopta - Popularly referred to as the ‘mini Switzerland’ of Uttarakhand, Chopta (at an approximate altitude of 2,608 m) is a slice of paradise tucked away in the Garhwal Himalayas. Surrounded by bugyals or velvety meadows and pristine snow-capped peaks, Chopta is an all-year holiday destination: pleasant in summer, rain-fresh in monsoon and a snow-clad fairyland in winter. Chopta is at the epicentre of the Panch Kedar – the five most sacred Shiva temples in the state. On its left are located Kedarnath and Madmaheshwar shrines and on the right, Rudranath and Kalpeshwar, and just above it, the Tungnath temple. Chopta is a birding paradise and you can see over 240 species of birds here, including native and migratory species like Himalayan monal, Himalayan swiftlet, Himalayan griffon, scarlet finch, hill partridge, and so on. Nearby places like Dugalbitta, Mandal village, Makkumath and the Tungnath trek route are the best sites for watching our feathered friends. Chopta has been declared as an important bird-watching site by national and international conservation and biodiversity organisations.
Mussoorie - Mussoorie, also known as Queen of the Hills, is among the most popular hill stations of the country. A Britisher, Captain Frederick Young, accompanied by an official named FJ Shore, had climbed up the hill from the Doon valley in 1827 and found this ridge offering great views and a salubrious climate. This visit laid the foundation for this grand hill station.
Tungnath is one of the highest Shiva temples in the world and is the highest of the five Panch Kedar temples located in the Rudraprayag district, in the Indian state of Uttarakhand. The Tungnath mountains form the Mandakini and Alaknanda river valleys.
One of the highest Shiva temples in the world, Tungnath lies at a height of 3,680 m in the Rudraprayag district. Lord Shiva's arms are said to have appear here. To reach here, pilgrims need to do a moderate trek of about 4 km from Chopta. While on the way, you will be able to see peaks such as Nanda Devi, Chowkhamba and Neelkanth.

TOUR DESTINATION-:
DEHRADUN - MUSSOORIE - RISHIKESH - CHOPTA - TUNGNATH - GUPATKASHI - KEDARNATH - GUPATKASHI - RISHIKESH
TOUR DURATION-:
6 Nights & 7 Days
DAY 01: DEHRADUN - MUSSOORIE (60 KMS/1-2HRS)
Welcome to DEVBHOOMI UTTRAKHAND. Arrival at Haridwar Railway station & meet our Suveedha Yatri executive and to Mussoorie. On arrival in Mussoorie check in at hotel. day free at leisure or on the Mall road or for your own activities. Dinner & Overnight stay at hotel.
DAY 02: MUSSOORIE SIGHTSEEING - RISHIKESH
Morning after breakfast In Müssoorie, visit Kempty Fall in the morning, Gun Hill, Lal Tibba, Camel back and Company garden, in afternoon . Sightseeing tours of Kempty Fall. Later drive to Rishikesh On arrival check in at hotel. day free at leisure or for your own activities. Dinner & Overnight stay at hotel.
Temples & Sight Seeing – Laxman Jhulla, Ram Jhulla, Triveni Ghat, Bharat Mandir, Ashram, Parmarth Ashram, later drive back to Haridwar drop at Railway Station.
DAY 03:- RISHIKESH - CHOPTA (185 KMS/ 5-6 HR)
Morning after breakfast drive to Chopta .On Arrival check -into hotel  & Enjoy tea and dinner at night. Chopta Overnight stay. Chopta is an unspoiled natural destination lying in the lap of the Uttarakhand Himalayas and offers views of the imposing Himalayan range including Trishul, Nanda Devi and Chaukhamba.
Chopta village is surrounded by forests of pine, deodar and rhododendron and is rich in flora and fauna include rare species of birds and musk deer.
DAY 04:- CHOPTA – TUNGNATH – CHANDRASHILA – GUPTAKASHI ( 5 KMS Trek)
We’ll start the 5 kms walk to Tungnath Temple and then Chandrashilla. until early morning breakfast. Take advantage of the treats on the trail. Via night, we’ll arrive in Chopta. Later drive to Guptakashi , on arrival check-into hotel overnight stay at Guptakashi hotel.
DAY 05: GUPTAKASHI – KEDARNATH (18KMS TREK)
Morning after breakfast  drive to Sonprayag, Trek start from Sonprayag to Kedarnath (3584 mts) on foot or on by pony / Doli. Tour members should carry personal medicines, heavy woolen, tolietteries and clothes for an overnight halt at Kedarnath. Check in Tent. Later visit Kedarnath Temple.
Gaurikund: At a distance of 5kms from Sonprayag and at an altitude of 1982 meters, one can take bath in the hot water pond here and visit the Gauri Temple. This is the place where Goddess Parvathi meditated to attain Lord Shiva. It is the base for a trek to Kedarnath.
Kedarnath: The Kedarnath shrine, one of the 12 jyotirlingas of Lord Shiva, is a scenic spot situated, against the backdrop of the majestic Kedarnath range. Kedar is another name of Lord Shiva, the protector and the destroyer. According to legend, the Pandavas after having won over the Kaurava in the Kurukshetra war, felt guilty of having killed their own brothers and sought the blessings of Lord Shiva for redemption. He eluded them repeatedly and while fleeing took refuge at Kedarnath in the form of a bull. On being followed he dived into the ground, leaving his hump on the surface. The remaining portions of Lord Shiva appeared at four other places and are worshipped there as his manifestations. The arms appeared at Tungnath, the face at Rudranath, the belly at Madhmaheshwar and his locks (hair) with head at Kalpeshwar. Kedarnath and the four above-mentioned shrines are treated as Panch Kedar.
DAY 06: KEDARNATH -GUPTAKASHI (18 KM Trek)
Morning after Aarti & darshan trek back to Guptakashi. Overnight stay at hotel.
DAY 07: GUPTAKASHI – RISHIKESH (175 KMS/ 5-6 HR)
Morning after breakfast drive back to Rishikesh. On arrival visit Rishikesh, the 'place of sages' is a celebrated spiritual town on the bank of Ganga and is surrounded by Shivalik range of the Himalayas on three sides. It is said that when Raibhya Rishi did hard penances, God appeared by the name of " Hrishikesh " and this area hence firth came to be known as Rishikesh.  Temples & Sight Seeing – Laxman Jhulla, Ram Jhulla, Triveni Ghat, Bharat Mandir, Ashram, Parmarth Ashram, later  drop.

Note :- Ac will not work on hill area(after Haridwar)

COST EXCLUDES-:
• Air fare / train fare.
• Coolie / porter charges.
• Camera charges.
• Donations at temples.
• Extended stay or travelling due to any reason.
• Any meals other then those specified in Tour Cost Includes.
• Expenses of personal nature such as tips, telephone calls, laundry, liquor etc.
• Any other item not specified in ‘Tour cost includes.
• Guide & Entrance fees during sightseeing. 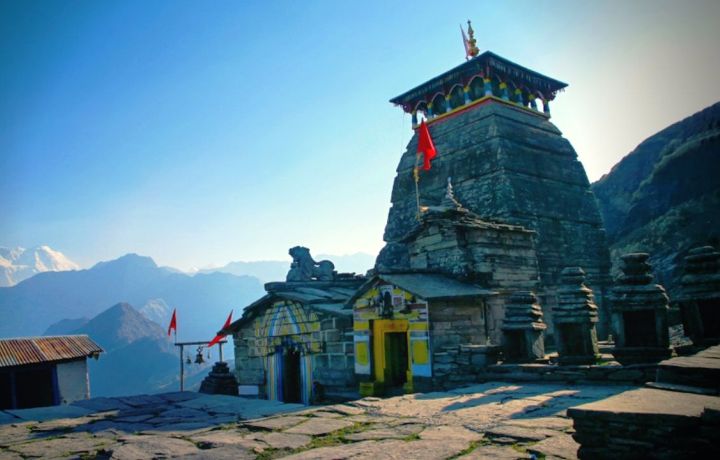 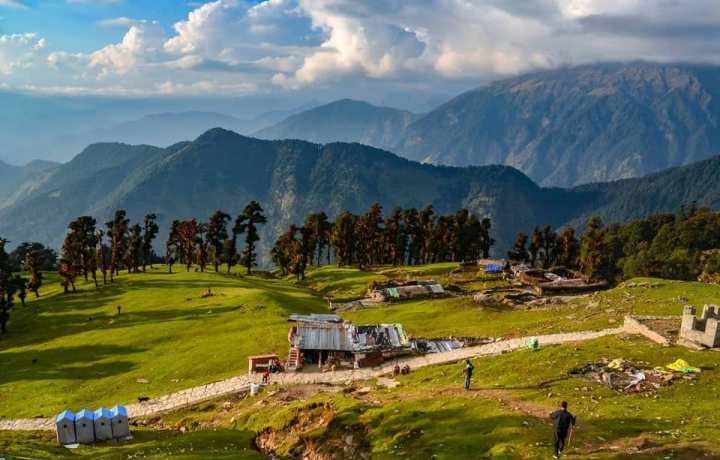